2. From hunter-gatherers to planetary stewards

Believe it or not but for most of human history we have existed as hunter-gatherers. Now, thanks to the dramatic fossil fuel-driven expansion since the 1800s, our imprint on the global environment is so large that we risk triggering a number of abrupt or even irreversible global environmental changes. The question is how we can become planetary stewards instead, and strike a long-term balance between human well-being and sustainable use of the earth’s ecosystems. 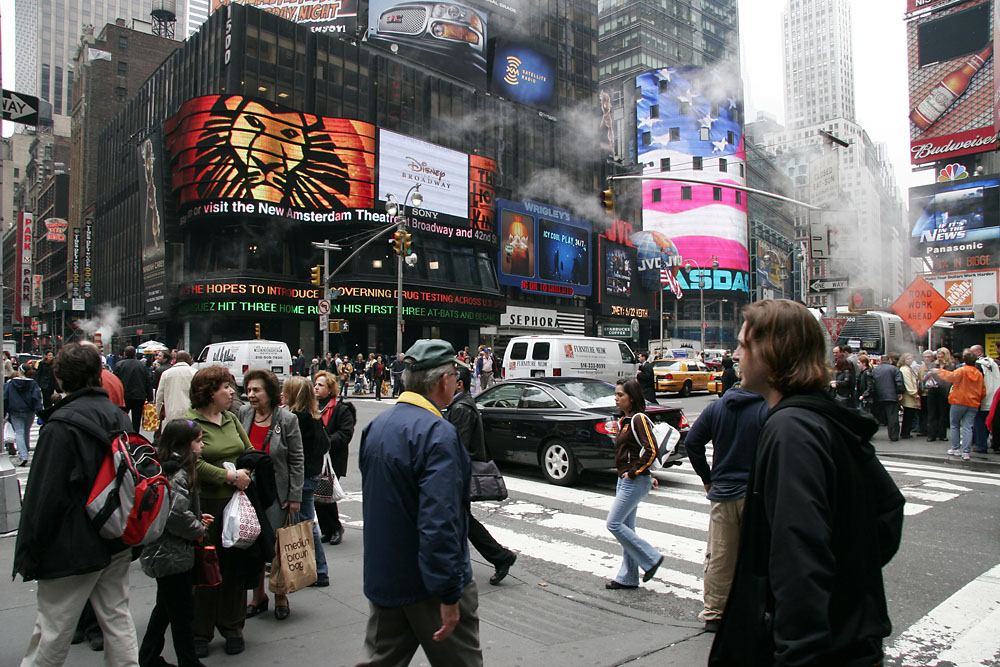 We have had a good run, but business-as-usual cannot continue. Humanity has begun to emit more than nature can absorb and acquire more than the e earth’s resources can provide. In other words, we are beginning to live off the e earth’s capital, rather than the interest. The good news in all this is that we are the first generation with the knowledge of how our activities influence the whole earth system. We are also the first generation with the power and responsibility to change our relationship with the planet.

The evidence that the e earth is warming and that human emissions of greenhouse gases have been responsible for most of this warming since the middle of the 20th century is unequivocal. However, just as distressing as climate change is the increasing erosion of the e earth’s goods and services. There is a growing acknowledgement that humans must be seen as part of and not apart from nature, and that the delineation between social and ecological systems is artificial and arbitrary.

A further realisation of the strong correlations between human actions and the earth’s life-supporting system is reflected in the term an Anthropocene. This indicates that the human imprint on the planet is now so great that the earth seems to have entered a new geological epoch. It is leaving the Holocene, the remarkably stable period within which human societies as we know them have  developed, and it is entering a stage where  humanity itself has become a global  geophysical force. In other words, we have gone from being primitive hunter-gatherers to a force that can tip the earth’s future into the unknown. In the worst case scenario  this new state of the Earth is much warmer, with more sea and less land, impoverished  ecosystems, mass extinction of species  and a number of severe socio-economic  consequences.

About 10,000 years ago, agriculture was developed roughly simultaneously in four different parts of the world. This set humanity on a trajectory that led to a more sedentary lifestyle, the development of villages and cities and the creation of complex civilisations that eventually spanned large regions. Around 1800 ad, however, something dramatic happened. Our ancestors at that time learned to access and exploit fossil fuels as a new energy source and dramatic changes came about at a pace never experienced before. Fossil fuel based agricultural and manufacturing systems enhanced the production of foodstuffs and other goods, and consumption began to grow along with an increasingly healthy and expanding population. Little did they know that the rapid expansion of fossil fuel usage was slowly raising the co 2 concentration in the atmosphere above the limits of the Holocene? The exit door from the Holocene had been opened. The increased pace of just about everything after World War II marked a further threshold in humanity’s history called the Great Acceleration. 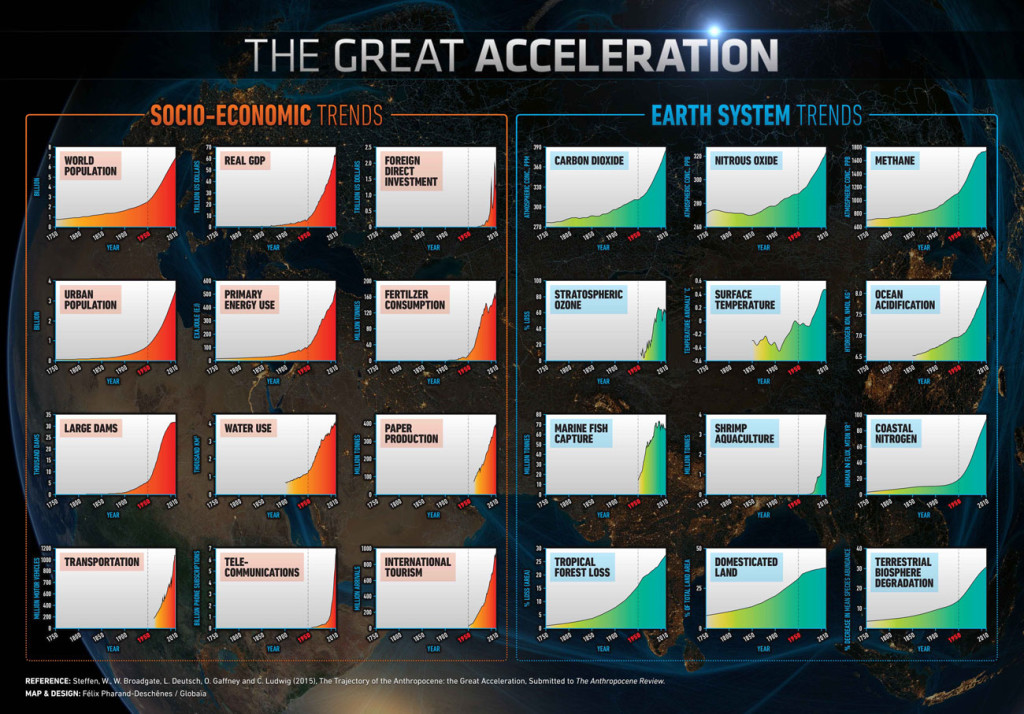 The Great Acceleration: Since 1950 the human population and the global economy has increased dramatically. Human connectivity has also grown at an astounding rate. Not surprisingly, the pressure on our climate and ecosystems has also risen dramatically.

The  UN’s Cities and Biodiversity Outlook, which is the world’s first global  analysis of how projected patterns of urban  land expansion will impact biodiversity and  crucial ecosystems, states that production  and consumption activities heavily  concentrated in cities have contributed  to some 80 percent of all greenhouse gas  emissions. Furthermore, over 60 percent of the land projected to become urban by 2030 has yet to be built. This presents great challenges, but also major opportunities to improve global sustainability by promoting low-carbon, resource-efficient urban development that can reduce adverse effects on biodiversity and improve quality of life. It is clear that the Great Acceleration has not been an environmentally benign phenomenon. It has driven large changes to the Earth system and human activities are eroding the earth’s resilience. This is due to overfishing, extensive deforestation, a dramatic increase  in domesticated land, increasing nitrogen fluxes and a profound loss of biodiversity, to name a few. However, one other aspect deserves particular attention.

Being terrestrial creatures, much of human concern about changes in the planetary environment is focused on the land, the coasts or the atmosphere. In reality, the ocean is in many respects more important than both land and atmosphere in the functioning of the earth as a whole. The ocean, particularly the coastal seas, provides an important support by absorbing and recycling human-generated waste products.  Much of the nitrogen and phosphorus waste produced by human societies from e.g. agricultural fertilisers and animal and human excrement ultimately end up in the coastal oceans, where it is metabolised. Problems occur when the compounds produced exceed nature’s capacity to absorb them.  Excess nutrients can generate a number of negative environmental effects.

We know the Earth’s resilience and resource base cannot be stretched infinitely and we are uncomfortably aware that we are heading in the wrong direction. The question that remains is how we can better manage our relationship with nature.

The ocean’s ability to absorb carbon dioxide also slows the rate of climate change and consequently acts as a climate regulator. However, the most important regulating service the ocean provides for humanity is probably its global distribution patterns of heat and moisture via ocean circulation. For example, most of the rainfall over land that supports agriculture and cities originates through evaporation from the ocean. Humans are crucially dependent upon access to this freshwater and any changes to these climate conditions will have knock- on effects for human societies.  Another example is ocean acidification via increasing amounts of atmospheric CO2 reacting with the ocean water to form carbonic acid. The resulting higher acidity, mainly near the surface, has been proven to inhibit shell and skeleton growth in many marine animals and is suspected to cause reproductive disorders in some fish.   Ultimately, this renders ocean ecosystems less resilient to extreme events and human pressure. This can have drastic consequences on coral reefs and other marine life, with cascading impacts on the fishing and tourism industries.  Understanding the human trajectory, from hunter-gatherers to the drivers of the Great Acceleration and beyond, is an essential element in the process of transforming our role on earth from resource exploiters to resource stewards.

So, here we are. We know the problem, we know the Earth’s resilience and resource base cannot be stretched infinitely and we are uncomfortably aware that we are heading in the wrong direction. The question that remains is how we can better manage our relationship with nature. We are not only the first generation with the knowledge of how our activities influence the earth s system; we are also the first generation with the actual power and responsibility to change our relationship with the planet as a whole. Clearly, we have an uneven distribution of power  and responsibility, which means that  developed countries that were the engines of the Anthropocene, and especially the Great Acceleration, need to demonstrate  leadership in bearing the cost of  transformation. One of the most significant attempts to provide scientific guidelines for such improved stewardship came in 2009 when a group of 28 internationally renowned scientists identified and quantified a set of nine planetary boundaries within which humanity can continue to develop and thrive for generations to come. 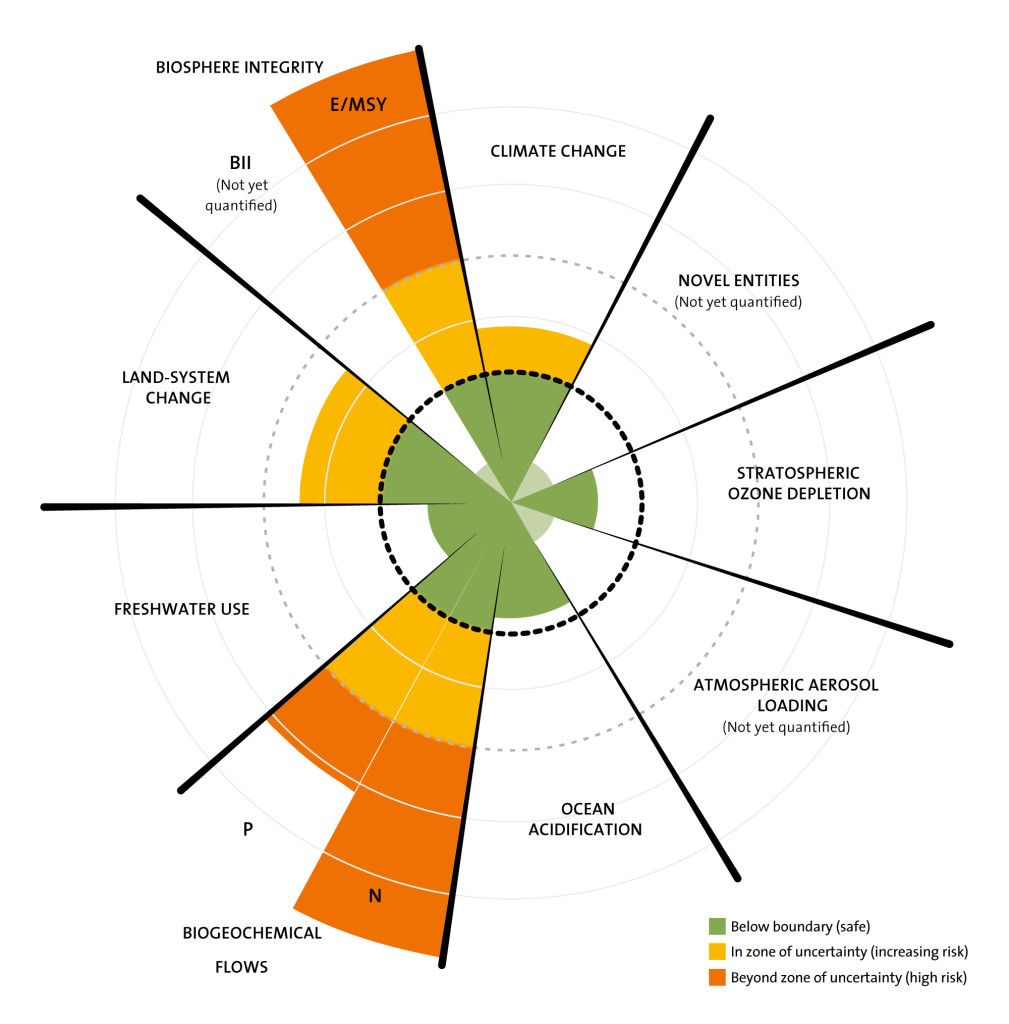 Respecting these boundaries reduces the risks to human society of abrupt or irreversible environmental changes. The nine processes with boundaries include climate change, stratospheric ozone, ocean acidification, the nitrogen and phosphorus cycles, biodiversity loss, land use change and freshwater use. In 2015, an updated version of the 2009 paper was published. It showed that four of nine planetary boundaries have now been crossed as a result of human activity. The four are: climate change, biodiversity loss, land use change, and nitrogen & phosphorus flows. Two of these, climate change and biodiversity loss, are what the scientists call “core boundaries”. Significantly
altering either of these would drive the Earth System into a new state.

The approach was first and foremost designed to advance earth system science not to offer a complete roadmap for sustainable development. It has indeed been criticised for not being well adapted  to policy and many have rightly pointed out that the governance implications of the  planetary boundaries concept is a research  challenge in its own right. This is why the original framework cannot simply be taken off the shelf and translated directly to operational policy. 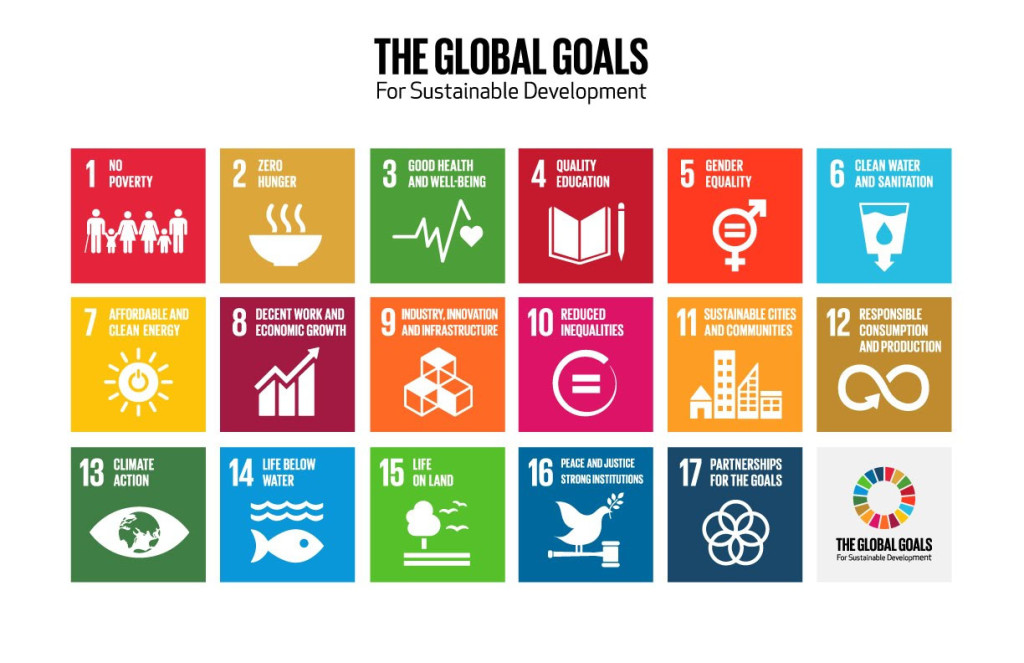 An interesting added perspective has also been the social boundaries suggested by Oxfam in their doughnut model. This model demonstrates the importance of ensuring that every person has the resources they need to meet their human rights, while we collectively live within the ecological means of this one planet.

The planetary boundaries approach also helps shift the focus from the slightly one-sided emphasis on climate change to a more complex systems perspective acknowledging that the desired stability of the e earth systems is dependent on a variety of factors. This means the need to address overfishing, deforestation, loss of biodiversity just as much as dealing with increased greenhouse gases. In fact, a more holistic approach in dealing with climate change can create synergy effects where actions to reduce greenhouse gas emissions globally can also improve air quality in metropolitan areas.